2. What does the girl want to borrow?

B. A model plane.

3. When does the man plan to visit Hong Kong?

4. What's the matter with Lily?

B. She has a sore throat.

C. She has a toothache.

5. Where are the two sneakers?

6. When did Alice go to the old people's home?

7. What did Alice and Gina take there?

B. Milk and clothes.

8. Who played erhu then?

9. Why did the man stop the woman?

A. Because her car hit him.

B. Because she drove too fast.

C. Because he wanted a lift.

11. What's the relationship between them?

A. Policeman and driver.

B. Doctor and patient.

A. To watch a movie.

C. To visit the museum.

A. Next to the cinema

B. In front of the museum.

C. Across from the bank.

15. How did Jeff make great progress in Chinese?

A. By reading a lot.

B. By studying in groups.

A. A welcome party.

B. A housewarming party.

18. What are they talking about?

A. Became it's convenient.

B. Because it's good for health.

C. Because it's relaxing.

20. How many ways are mentioned?

21. Where did Mr. Liu lose his backpack?

B. At the airport.

C. At the train station.

22. What color is the backpack?

24. When will Mr. Liu take the train to Shanghai?

31. All the members decided to ________the money from the book sale to homeless people.

一Sweeping robots—more and more widely today. Why not buy one?

36. 一The young are always busy checking their mobile phones while getting together.

37一Everyone should stick to his dream.

39. 一There will be no winner in the trade war between China and the US.

A. how happy he is

B. how happy he was

C. he is how happy

D. he was how happy

At a dark night, a man came to a lonely village. When he walked slowly, a yellow light suddenly 41 at the end of the road. It came from a 42 which was c4iried by a man. A villager near him said, "Here Blind Sun comes."

As the lantern was coming near, the yellow light moved gradually to the man. The man asked, "

The man asked, "In that case, 47 do you carry a lantern?" The blind man smiled, "At night all the people without light are just as blind 48 me, so I light a lantern."

The man said, "I see, you light for others."

"For yourself? But there is no 50 to do that. " the man felt surprised again.

The blind man explained, "Were you every knocked by others 51 the dark? "

The man said proudly, "Believe it or not. I 52 knocked anyone. Although I’m blind, I carry the lantern, not only light for others, but let others see me, 53 they won’t knock me."

After hearing that, the man was lost in thought…

In fact, everyone has a lamp in himself, light it actively not only for others, but also for yourself! –Never put yourself in a dark 54 when you feel left out and find it hard to 55_ well with others, are you ready to light your lamp?

46. A. something B. nothing C. everything D. anything 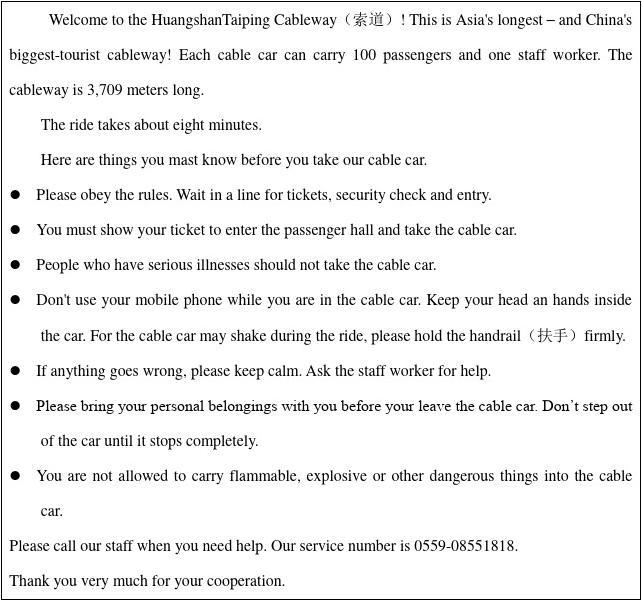 A. take a photo

B. show their tickets

C. hand in their mobile phones

59. Passengers should hold the handrail firmly because ________during the ride.

A. the cable car runs too fast

B. the cable car may be broken

C. the cable car may shake

C. a piece of news

My father died when I was five. It was hard on us all. My brother, who is eight years older than me, began to take care of my mother and me.

He took on more responsibilities than expected. I remember he made sure the rubbish was taken out, and the yard was cleaned. He did on his own, without being told to do so.

Because of my father's death, mom had to get a full time job. Brother would get me up for school and make me breakfast. While I was eating, he would lay out my clothes, ,make my bed, and gather my school books up.

Hand in hand we would walk to the bus stop. As we waited, he would play games my father used to play with me. When we returned from school, we were alone for about half an hour, until mom was home from work. Before I did my homework, he would sit me down with three cookies and a glass of milk. Then he would prepare something for mom to cook dinner.

Mom would greet us with a hug and kiss. This was our time to have some fun outside. This was my brother's time to be a kid.

One Saturday in June several years later, my mother and I were at a store where the Father's Day cards were sold. I stared at the cards. Mom said, "Cindy, I know this is hard time for you."

She smiled, "You're right, your brother has exactly been a father to you. Go ahead to choose a card."

I did so, and on Father's Day, my mother and I sat my brother down and gave him the card.

As he read it, I saw the tears in his eyes. Mom said, "Son, your father is proud of you, seeing that he raised a good man, and that you do your best to fill his shoes. We love you and thank you."

61. Who asked the brother to take on more responsibilities?

62. What did the brother do for the whole family?

① He got Cindy up for school. ② He prepared for dinner.

③ He did the dishes every day. ④He gathered up Cindy’s books.

⑤ He played games with Cindy. ⑥ He helped Cindy with the homework.

A. he played games with her at the bus stop.

B. they stayed home alone waiting for mom.

D. they had fun outside after mom came back.

B. My Second Father

Last night, a school night, my 11-year-old son's baseball team played a game that lasted until 9:30. By the time we got home and he had a quick dinner and shower, it was 10:30-an hour and a half later than a child who gets up at 6:30 should be going to bed. We love baseball. My son is having fun, getting exercise, and learning patience, teamwork and sports spirit. But the truth is that the game also influences his sleep.

As parents, we want good things for our children. We want them to be healthy both in body and in mind. To this end , we look for ways to help our kids grow and develop. We help them with their homework. We sign them up for dance, soccer and baseball. We encourage our kids to take honors courses（培优课程）or to have after-school jobs. And we praise them for hard-earned success and achievements.

However, the irony is that all of these activities and responsibilities that we are giving our children to make their lives colorful could be badly influencing their health and taking happiness away. Activities, responsibilities, and goals are good. But if we want our kids to realize their full physical, learning and social ability, sleep is important. We have to start taking sleep seriously.

Parents make bedtime routines and carry out（执行）strict rules about nighttime. But in fact, these measures（措施）aren't enough because getting our kids, enough sleep isn't just about carrying out stricter bedtime. It actually requires more than that. In order to ensure our kids get the sleep they need, bout parents and schools should make an effort.

A. isn't good at sports

B. wastes time every night

D. always hangs out with friends

67. What does the underlined word "irony" mean in Chinese?

68. What does the writer think of taking honors courses at last?

69. How can we make sure kids get enough sleep according to the write?

A. By making the children's lives colorful.

B. By refusing all the after-school activities.

C. By carrying out strict rules about bedtime.

D. By making an effort from parents and schools.

70. What would the writer probably talk about in the following paragraph?

A. Advice on how to sleep well.

B. Ways of changing kids’ education.

C. The importance of sleeping well.

Good morning, everyone. Standing here, I know it's time to say goodbye. When I look back to the past three years, many beautiful 77 rush to my mind. When I walk by classrooms, it seems that the lessons will never stop. I can't forget the sunshine coming in 78 the windows. I can't forget the library where I used to go. I can't forget tidy uniforms and lovely smiles. I'll remember the important people 79 helped and supported me-my teachers and my friends. These moments are so unforgettable that I feel like 80 them with you.

Although we have to go our 81 ways now, I hope we can value the happy time we spent together. My dear school, I love you, 82 . And I really don't want to say goodbye.

A middle-aged man, Xu Shijie, from Kaifeng is a pedicab (三轮车）driver, or rather, a tour guide. Over the past 15 years, he has served hundreds of foreign tourists. He told them stories about Kaifeng in English.

①With the help of a dictionary, he read English magazines and books in his spare time. He also kept a diary in English. Thus, he could learn more new words and grammar.

He first talked to a foreign tourist in 2003. He was nervous and not sure whether the tourist could understand him or not. Luckily, the tourist understood him and they talked happily that day.

Since then, Xu has studied English even harder. He practiced listening and speaking skills every night. In order to provide a better introduction to Kaifeng, he has also read lots of books about the city's history and culture. Xu is now better known as Jason, his English name. He has become the most popular pedicab driver in Kaifeng. ②He often helps tourists buy train tickets or medicine. Sometimes, he also helps them find quality hotels. Many people call Xu a culture ambassador. XU said he would try his best to live up to the praise and make Chinese culture known to the world.

A. Xu has learned English all by himself.

B. At first, people laughed at Xu’s poor pronunciation of English.

D. This is not only because he can speak English, but also because he is warm-hearted.

练习三：What does the passage mainly talk about?

Great Changes around Me

In the past few years, great changes have taken place around me.

任务三：Xu Shijie learned English by himself and he introduced Kaifeng / Chinese culture (history) to the world / foreign tourists.

Great Changes around Me

in the past few years, great changes have taken place around me. The roads used to be narrow and crowded. The houses were old and small. The air wasn't fresh enough. Sometimes, there was terrible smell. The river was polluted badly and there was rubbish in it.

Nowadays, the roads are wide and clean. It's really convenient for people to go out. We can choose different kinds of transportation to go anywhere. Lots of tall buildings have been built in the city. Most of us have moved to big beautiful houses. The sky is blue and the cloud is white .The birds are singing happily. My hometown looks like a big garden with green trees, grass and colorful flowers.

Our country is rich and strong, we are living a happy life. I'm sure as time goes on, our life will become better and better!