15. Where does the talk probably happen?

A. At the Lost and Found.

B. In a restaurant.

A. he has finished his study.

B. one of his family members is ill

21. One of his daughters became ____ English teacher last August.

26. Next week, each student in the class ____ a small gift from their teachers.

D. the most difficult

—To realize our dream!

A. why you came her

B. why did you come here

C. how you came here

D. how did you came here

Right after lunch, Mother found she had got a cold. She did need a rest in bed. But first she had a few things to do. Prepare the meat for __31__. Leave a note for the cleaners...

At last, she fell into bed, soon asleep...

“Wonderful! " " No problem! " The children ran off __34__. Mother was left in her quiet room. She felt terrible! But everyone else seemed great. In fact, there seemed to b a party going on with loud laughs __35__ the children.

Another crash came! The younger girl rushed in with news. "They __37__ your plate and the dog ate all your dinner.”

The girl ran off. There was more noise until, finally, the children appear, __38__. They were proud of what they brought. There is a glass of water, three beans, a cold boiled potato and a small piece of burned meat.

A young woman traveled and stayed in a hotel. All the rooms in the hotel were singles(单人间). So she lived in a single room.

Just when she was going to bed, there was a knock at the door. She had no friends in the city. So she was quite surprised but still opened the door.

The man who was standing at the door looked a little nervous. “Oh! I’m sorry.

I thought this was my room,” the man said and walked away in a hurry.

The woman called the police at once. Soon, the man was caught. He was a thief(小偷)! But how did the the woman know that?

All the rooms in the hotel were singles. Who would knock at his own door if he was staying alone? Only a thief would do this. He wanted to see if anyone was inside before he broke into the room.

B. in a police office

D. in her friend’s home

A. find his friend in the city

C. see if anyone was inside 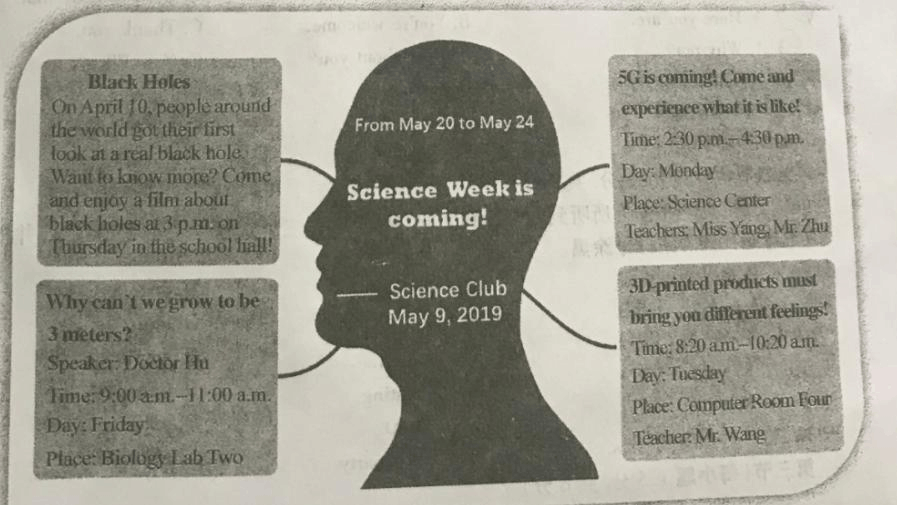 A. in the school hall

B. in Computer Room Four

A. watch a film

C. listen to a talk

Cinyee Chiu, an artist from Taiwan, is always happy to try something new. Her amazing works won lots of pri zes. Among them, “24 Solar Terms(节气)” is the most popular.

Ancient Chinese divided a year into 24 parts according to the changes of the weather. It's the 24 solar terms. But not everyone knows them well. Cinyee Chiu put the 24 solar terns in pictures to help people understand them better.

Cinyee turned each solar term into an animal. But these animals are not just animals. You can also find seasonal fruits, vegetables or beautiful flowers on them.

When spring comes, water gets warm and fish start to swim around. So Cinyee chose fish as a symbol of Start of Spring. Also, she drew spring vegetables, Chinese chives on the back of the fish.

White Dew falls on about Sept. 8. It shows the beginning of the cool autumn. There are colorful leaves and cooler nights at this time of year. As the temperature

falls, white dew(露珠) is often seen on the grass and trees at night. For White Dew, Cinyee chose a raccoon—a small animal with thick hair. She drew white spots(小圆点) on the raccoon to show dew. And she used the dragon fruit to show the rich colors in autumn.

A. a raccoon likes fish

B. Start of Spring falls on about Dec. 8

C. White Dew shows the end of the autumn

A. why Cinyee made herself known

B. who divided a year into 24 parts

D. what Start of Spring and White Dew mean

Fights at school sometimes happen. But how can you keep away from a fight? Here’s something you can do.

Be calm(冷静). Sometimes, you feel so angry that you really want to teach somebody a lesson. But being angry can't solve problems. Neither can a fight. Instead, it may bring you more problems. In the school, everyone involved(卷入) in a fight will be punished, no matter who started it. There are winners in a fight.

Shout loudly. If you know someone is coming up behind you to attack, turn toward the person with your hands up in front of your body and loudly say “stop” before walking away. Loud voice can usually make the attacker calm down. If the person doesn’t stop, cry for help by calling out the name of a teacher whose office is nearby.

fight is not really helpful to him. If you really want to give him a hand, try to ask him to give it up. Also, you can tell him if he gets involved in a fight, he may get hurt and be punished. Then, try to learn why he wants a fight and help him find a right way to deal with the problem.

D. Talk to someone.

A. help students keep away from fights

B. warn students not to fight

C. advise students to help each other

Imagine a world with no more animals: no elephants, no tigers or lions. To some people, that thought is too terrible for words. So they are doing something about it. Tiffany Soechting is one of them.

Being among wild animals—feeding them and caring for them—is all Tiffany Soechting has wanted to do with her life. And that is exactly what she does!

Soechting is the huma n “mother” to the 500 animals that live on her family wildlife farm in San Antonio, Texas. On the farm, she cares for animals from around the world. Soechting says she loves them all. However, two reticulated giraffes(网纹长颈鹿) take up a special place in her heart. Their population in the wild has become smaller by 80% in the last 15 years. “I’m so glad to get help from five wildlife researchers that took giraffes up to a higher level. All our hard work helps prote ct giraffes living in the wild.”

Besides her animal caring, Soechting also holds monthly classes, where she teaches school children about the animals.

Soechting also opens the farm to the public. Visitors not only learn about the animals, they can also get close to them. And the animals are not against that. For them, people are part of their natural environment.

The farm is part conservation(保护) area, part educational center and part animal park. As the animals walk peacefully around the grounds, it is easy for them to forget that San Antonio, a busy city, is just a few minutes away.

A. she has already married and has some children

B. the animals on the farm are taken good care of

C. the animals can get along well with each other

A. confident but busy

B. humorous and lovely

A. How to Save Wild Animals

B. Soeching and Her Wild Animals

D. A World Without Wild Animals 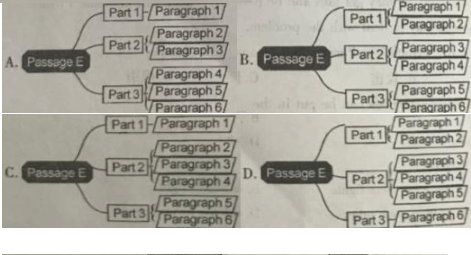 A: Excuse me, Madam. You can’t park in front of the shop.

A: About two kilometers.

B: Thanks. Can you tell me the way there?

B: It’s very kind of you. Thank you so much!

A: You are welcome.

In Jinzhong, Shanxi Province, there is a group of people who are busy drawing maps around. They are not workers on geography, but dispatchers(调度员) on Emergency(急救) Center of the city.

Since 2007, the dispatchers in the center have been drawing maps of the local areas.

“A dispatcher’s job is counted in seconds,” says Liang Ruimei, a dispatcher in the center. She has been working in ther center since it started in 2007. “We must answer the phone in 3 seconds, get clear information about the patient in 60 seconds and dispatch(调度) emergency medical workers in 3 minutes at most. If we save one second, the patient may have a better chance to live.”

Although nowadays the center has electronic maps, the dispatchers still walk through the streets to draw maps by hand.

After many years’ hard work, the dispatchers keep every building and street of the city in mind. They even know whether or not a car can enter the gate of a building. Sometimes the caller can’t tell clearly where he is, but it doesn’t matter. As long as he describes the buildings around, the dispatcher can dispatch emergency medical workers to him.

“We are trying to be quicker than Death,” says Liang.

65. Is Liang Ruimei a dispatcher in Emergency Center of Jinzhong?

66. When did Emergency Center of Jinzhong start?

67. To be quicker than Death, what do the dispatchers in Emergency Center of Jinzhong do?

68. Do you think it necessary for dispatchers to draw maps by hand when they have electronic maps? Why or why not?

70. His grandparents live in Shanghai.(对划线部分提问)

I recently turned 30. Thinking back what I’ve experienced, I took some time to write myself some advice.

Even if it kills your relationship. Even if you lose your friends. Even if it means you end up getting hurt. __74__ people even if they give you a reason not to.

But don’t be too naive(幼稚). Some people are out to hurt you.

People are the best and __75__ thing that will happen to you. Some will help you go further and faster. Others will pull you down to their level and make you lose.

Most are OK. Many are average. Some are excellent. You don’t need a lot of people or friends around you. You need amazing people who help you just __76__ you help them. Only a few people will change your life forever. Find __77__.

Don’t waste time on people who cheat you.

Value other people’s __78__. D o n’t be late. That means that if you’re late, you don’t care about them or their time. And that also means you think you’re worth more and therefore(因此) keep them __79__. Some people will tell you that i t’s OK to be late. It’s not.

If you don’t learn something wh e n you fail, then all you’ve done is failed. If you learn something, then you’ve grown. Every time you grow and fail and learn, you become better at finding out the way to __81__.