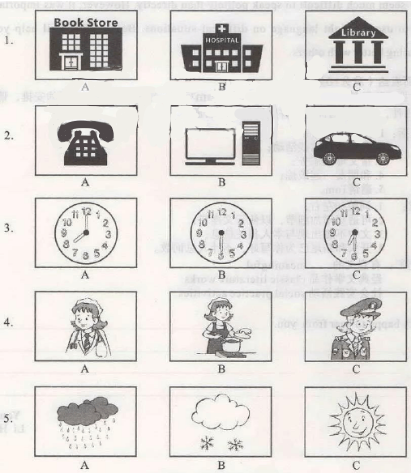 C. What did you say just now?

12. How long is Tim going to stay in Europe?

A. About one week.

B. About a month.

13. What will the two people do tomorrow?

14. Why do they decide to go to City Screen?

A. Because it has the best service.

B. Because it has delicious food.

C. Because the seats and the screens are the best there.

A. It is behind the supermarket.

B. It is far from the supermarket.

C. It is next to the main street.

16. How old was Tom when he could read on his own?

17. Who does Tom help by working in a reading program?

18. How often does Peter come to the animal hospital?

B. Three times a week.

19. Why does Peter choose to be a volunteer at the animal hospital?

A. Because he can learn to look after animals.

B. Because he can play with animals.

C. Because he can make friends with other volunteers.

20. What does Peter want to be in the future?

A. An animal protector.

B. An animal doctor.

30. -The beautiful lady with glasses over there looks like our English teacher.

-It be her. She has gone abroad.

-, though he had a stomachache.

32. - More and more foreigners come to visit the Gfeat Wall.

33. exciting news it is 1 3D一printed houses will come out!

34.-It's nearly lunch time.How about having some noodles and dumplings?

C. That's nice of you

A.When I Can arrive

When people are young, meeting and overcoming challenges wilt make them strong and ready to 39 life. If we look at successful people, we will find that the more challenges they have had, the more 40 they are. One famous man, who now owns many big factories, used to sell socks from door to door when he was young, 41 successful man is Eric. He set up a college 42 the age of 30. His father died when he was only 16. As the oldest child in the family, he worked in the day and studied in the night. His father's death forced him to 43 fast. He took up the challenges and overcame them. Today, not only he himself, 44 also his brothers and sisters are leading successful lives.

Some parents and teachers actively 45 young people to face challenges. It is important for them to learn to meet challenges and overcome them.

I'm sure you all know how important recycling is.

things. It sounds like magic. But it's actually very scientific.

A. It's a magic performance.

B. It's a way of burning old things.

D. It's a scientific research.

47. Which material is not mentioned in the passage?

A. have some valuable stamps

B. are in a triangle circle

C. are recycled and reused

D. are thrown away

D. recycling in a scientific way

Once upon a time, a wealthy old man lived alone in a big house. He was growing weaker day Toy day and was unable to take care of himself, so he decided to hire（雇佣） a nurse to help with housework and take care of him.

One day, the old man interviewed two nurses —Anthony and Peter. Anthony happened to be a handsome young man, while Peter looked quite ordinary (普通的). The old man asked Anthony to make tea for him. After Anthony left, the old man turned to Peter and said, “Anthony has given me a very bad account（描述）of you. He said you are rude(粗鲁的) and untrustwarthy (信赖的) . Is this correct? ”

Peter thought for a minute and said, “I f Anthony has a bad opinion of me, there must be something wrong with me. I shoutd take some time to change these things.”

The old man was very impressed by Peter’s character. Meanwhile, Anthony returned with a cup of tea for the old man, The old man sent Peter to make breakfast for him. He then turned to Anthony and told him, “Peter spoke very poorly of you while you were gone. What do you think ahout this? ” After hearing this, Anthony became angry and started cursing(咒骂).

In the end, the old man hired Peter. Altbough Peter looked quite ordinary, he had impressive inner(内在的) beauty.

A. Live with him.

B. Help with housework and look after his wife.

C. Work as a doctor.

D. Help with housework and look after him.

A. had had some bad words of him

B. had praised him

C. did not trust him

D. considered him to be not important

54. How did Peter react(反应) when he heard the old man's words?

B. He took it seriously.

C. He didn't believe him.

55. What can we learn from the passage?

A. Ordinary people are more trustworthy.

B. Handsome men must be good men.

D. Others' opinions are always correct.

Earlier this year, China achieved a new milestone（里程碑）in space exploration. On Jan 3, Chang'e 4 became the first space probe（探测器）in history to successfully land on the far side (dark side) of the moon. After a 26-day journey, it touched softly down on a crater. The whole process of landing lasted 12 minutes, which opened a new page in history of mankind's space exploration.

Chang'e 4 has sent back photos of the far side of the moon. It is also being used to carry out experiments. The data (数据) collected from these experiments could be used to help us build a base on the moon in the future. The success of the Chang'e 4 mission (任务) is a major achievement for China's space program.

China launched its lunar (月球的) exploration program in 2004, naming it Chang'e. Chinese scientists set three goals—“orbiting (环绕运行) , landing and sample (样本) returning”. Chang'e 4 has realized the second goal. The third will be achieved during the Chang'e 5 mission, which is set to take place before the end of this year.

Following the success of the Chang'e missions, Chinese scientists are looking even farther into our solar system (太阳系) . China's first Mars mission is expected to be carried out by 2020.

A. in deep space

B. on the moon

C. on the near side of the moon

D. on the far side of the moon

57. What's the most important about the landing place?

A. It's far from the earth.

B. It has many resources.

C. It's ideal for scientific research.

D. It's dark and unknown.

59. Which of the following is the second goal of China’s lunar explo ration grogram?

A. Landing on the moon.

B. Bring some samples back to the earth.

C. Building a base on the moon.

D. Travelling around the moon.

60. What can be the best title of the passage?

A. The Space Probe.

B. Exploring the Moon.

People in different countries speak different languages. But is there a lanuage that can be understood by everyone in the world ? Emojis might be the first truly universal(通用的)language.

Emojis are a kind of special language. Pictures are used to put meaning across, A group called the Unicode Consortium is in charge of choosing official(官方的) emojis. It has added new emojis every year since 2014. These new emojis do not come out of nowhere. They come from what people think about, like and care about.

Emojis can be used to represent (代表) different groups of people. In 2015, emoji faces with different skin tones (肤色）were added. In 2016, different jobs were added, such as doctor, police officer and painter along with female versions of these jobs, This year, emojis of disabled people were added, including emojis of blind people and people in wheel chairs.

But there is also more to emojis. They can also refer to pop culture and new cultural trends. New emojis in 2019 have included several animals, such as sloths（树懒）and flamingos (火烈鸟).These animals are not very common, but are known to many people. For example, sloths have become popular thanks to the 2016 film Zootopia (《疯狂动物城》). Many fashion designers have included flamingos in their designs in recent years. This animal makes people feel like they're on a tropical (热带）vacation.

It seems that emojis are a mirror of the world we live in. It will be interesting to see how they change and grow in the years to come.

61. Emojis are a special language using the to put meaning across. (仅填1个词）

62. Where do new emojis come from?（回答不超过9个词）

63. When did emojis begin to show different jobs?（回答不超过2个词）

Anita: Oh, really? What are they made of ?

Anita: Oh, OK. By the way, where did you buy those chopsticks?

Anita: Yeah. Chopsticks are usually made of wood. 68

Susan:Yes, it was made in Thailand. 70

Each different part of China has its own special forms of traditional art.

Chinese paper cutting, or jianzhi, is a kind of folk art. It's a way to 71 people's hope and feelings. It has a 72 of more than l,500 years. Paper cutting sounds very easy but it can be difficult. Red paper is usually used as red is 73 with happiness in Chinese culture. The most 74 pictures are flowers, animals, xi（喜）and fu（福）. They are put on windows, doors, and walls 75 symbols of wishes for good luck.

Chinese clay art is well known and popular all over the country. Now many kids learn to make it in schools or even shopping 76 . To make Chinese clay art, the clay is shaped by hand into things, such as cute children or 77 characters from a Chinese fairy tale or historical story. 78 the things get dry in the air, they are fired at a very high heat and then polished and painted.It takes several weeks to 79 everything. Although they look so small, they look very real. 80 small pieces of clay art show the love that all Chinese people have for life and beauty.

When you travel in a foreign country, it is important to know what to ask for help politely. For example, he may ask “Where is the nearest hotel?” or “Could you please tell me that where the nearest hotel is?” These are similar question for directions. Although both are correct, second one sounds more polite. It is not enough just to ask a question correct. You also need to ask for help in a polite way.

It may seem much difficult to speak politely than directly. However, it was important to learn how to use the right language on different situations. Being polite will help you to communicating better with others.

I'm very happy to bear from you.